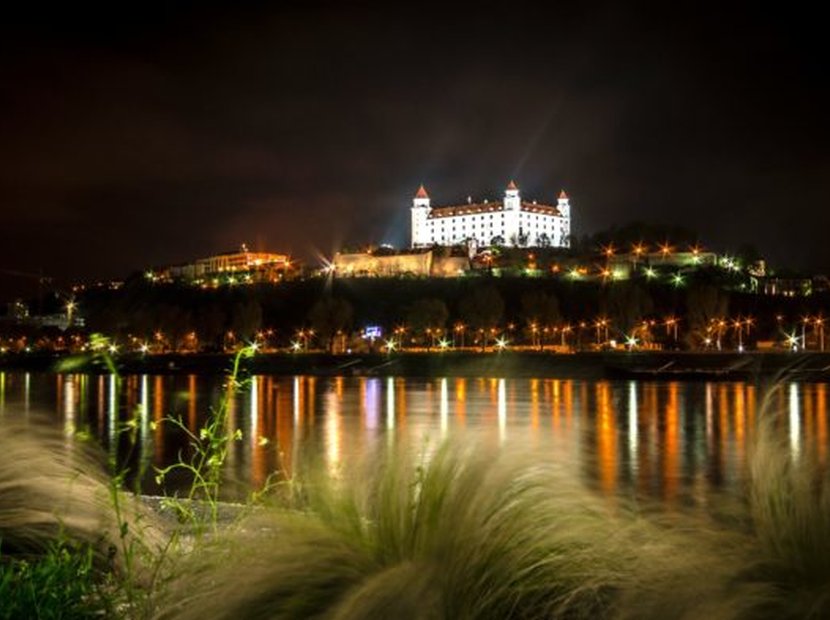 Bratislavský , the iconic castle of Bratislava, is one of the most beautiful sights in the city.
Safeguarding the city from the hills of the Little Carpathians, it houses the Slovak Parliament and collections of the Slovak National Museum.

And, when you stay at Mamaison Residence Sulekova Bratislava you are less than 20 minutes on foot away from this famous landmark. Often, you can see it from your window in all its grandeur.

It has been there in times of greatest glory as well as oppression, witnessed struggles for power and conscience, survived wars and a devastating fire, and remained alive up to this day as a proud testimony of times long gone – a symbol of endurance, strength and indomitable will.

Reconstruction of the Bratislava Castle - Chancellery of the National Council of the Slovak Republic. May 2010.

One of the noteworthy things about the lovely turreted castle that looms over the Danube is that it's the first-ever written mention of the city. It's documented in the Annals of Salzburg in 907. But its history runs deeper. Here are some of the most intriguing highlights:

Due to its strategic position on the Danube, right in the heart of Europe, between the Carpathians and the Alps, this place was inhabited during the Eneolithic Period (about 2500 BC). As archeological finds attested, there was an acropolis of an oppidum here during the Celtic and Roman Period (450 BC – 5th Century AD). In fact, recent research unearthed a residential structure most likely erected by the master builders of the Roman Empire. Gold and silver coins discovered on the site further the thesis that the rulers of the castle at the time were sovereigns of significant influence.

After the arrival of the Slavs on the territory of Bratislava, the aspect of the oppidum changed. The new rulers of the land used some of the structures left behind by the Romans and the Celts, but also erected structures of their own: initially a massive castle with a wooden rampart, and later, in the IX century, a stone palace surrounded by dwellings and a basilica. The temple is the largest Great Moravian basilica on the territory of Slovakia.

During the Christian Kingdom of Hungary, in the High Middle Ages, the Hungarians destroyed the Slavic castle, but they understood the strategical significance of its position and begun constructing a new stone structure. They also modernized the rampart and erected the Church of the St. Savior with a chapter and a church school on the remains of the basilica.

Except for two of its towers, as it stands today, Bratislavský hrad dates from the time of King Sigismund (Holy Roman Emperor), when the castle was the center of the German-Czech-Hungarian Empire. Konrad von Erlingen supervised the construction of a massive Gothic palace, which was converted to a Renaissance castle by Italian builders at the order of emperor Ferdinand I. of Habsburg between 1552 and 1562. Consecutive works turned the building into a Baroque edifice, then a more modern rococo structure during the queen of the Kingdom of Hungary, Maria Theresa of Austria from 1740 onwards.

Napoleon's troops bombarded the castle in 1809, and in 1811, the castle was destroyed by fire because of the negligence of garrison soldiers.

The castle laid in ruin until 1957. The reconstruction followed the Baroque blueprints, but also elements of the Gothic and Renaissance castle were brought back to life. It now stands in sparkling white, dominating the city, welcoming visitors with a wealth of information about the history of Bratislava. It is a must-see when you stay at  Mamaison Residence Sulekova or simply when you visit the capital of Slovakia.