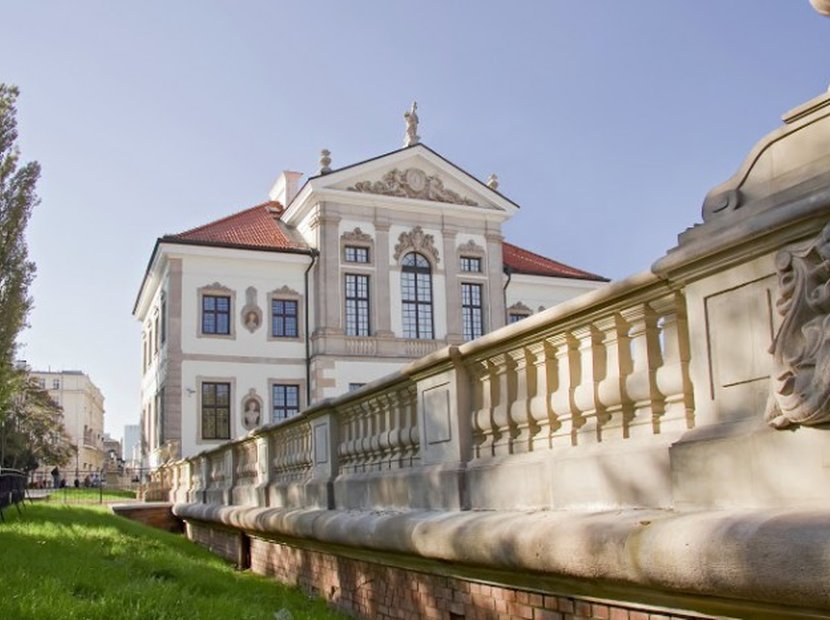 Culture Warsaw
Warsaw is advertised as the city of Chopin, because the great Polish composer Frédéric François Chopin was born and raised here. His musical genius drew inspiration for many of his early works from the life pulsing on these historic streets, and from the beautiful nature of the local parks.

“The muse of his homeland dictates his songs, and the anguished cries of Poland lend to his art a mysterious, indefinable poetry which, for all those who have truly experienced it, cannot be compared to anything else,” said Franz Liszt once, referring to Chopin. 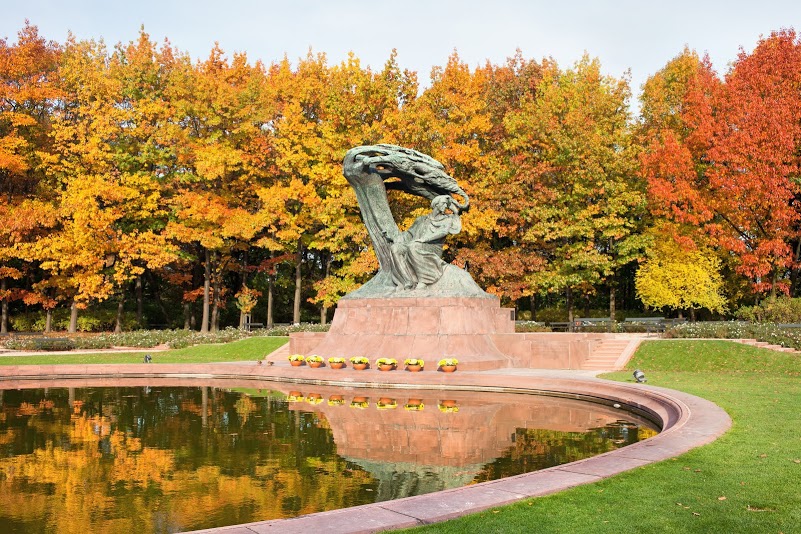 Fryderyk Chopin Statue in Warsaw © Artur Bogacki - Fotolia.com In fact, Chopin loved the cradle of his youth so much, he requested his heart be removed after death and returned to his beloved Warsaw. So if you want to tour Chopin’s Warsaw, you only need to follow his heart. Walk down Krakowskie Przedmieście, to find the Church of the Holy Cross, where the heart of the composer rests in an urn immured in a pillar. This remarkable church, one of the most visited landmarks of the city, was built between 1679 and 1757, and was a collaborative effort, involving the creative genius of several architects and artists, including Józef Szymon Bellotti, the royal architect at the Royal Court of Poland, for the main building; as well as Józef and Jakub Fontana for the towers and the facade. But nothing of the original works remains: the church was blown up by the Germans in 1945. What you see today is the work of architect B. Zborowski. Luckily, the urn containing the heart of the composer was removed during the Warsaw Uprising (1944) by the Germans, who gave it to Bishop Antoni Szlagowski. Only on October 17, 1945 the heart was returned to the church, during a ceremony that celebrated 96 years since Chopin’s death. 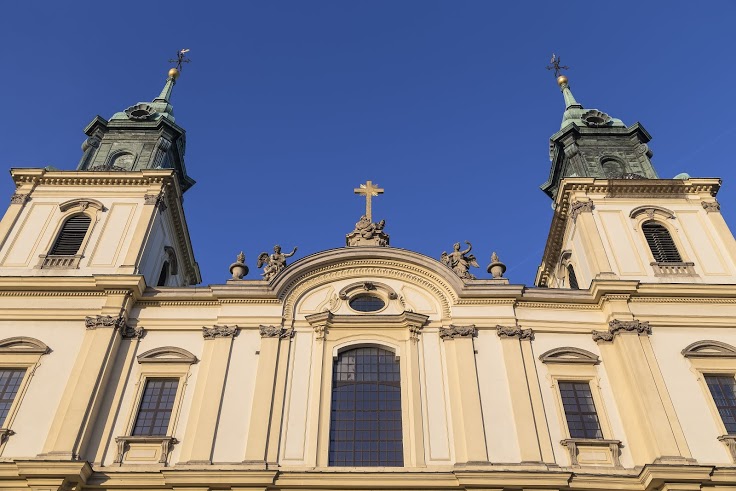 It’s easy to see Chopin’s Warsaw like a tourist: the city celebrates its most beloved son with pride and joy, and promotes all the significant landmarks that were touched by the composer, one way or another. The official route suggested by the City of Warsaw was inaugurated in connection with the 200th anniversary of Chopin’s birth in 2010. When you follow the route, you will find several multimedia benches, which have an interactive sound system that will play Chopin’s music. There are 15 spots where you can rest on one of Chopin’s Benches, all connected with landmarks that played an important role in the life of the composer. For instance, at Radziwiłł Palace, where Chopin performed for the first time in public, the bench will play RONDO in C minor, Op.1; 32”. At the Holy Cross Church, you will listen to the MEMORIAL MARCH from SONATA in B minor, Op.35; 45”; while the bench on Miodowa Street will play MAZUREK in A minor, Op.68; 34”. This is the street where you will find Honoratka, the only venue from Chopin’s time that still stands in its original form. 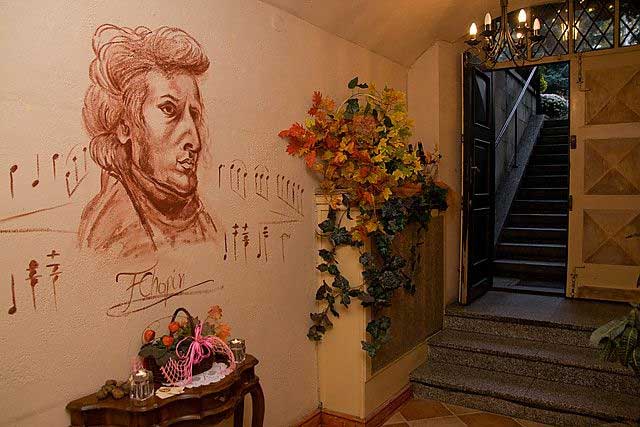 The composer used to dine and meet with his contemporaries often in the restaurant, back then called Kawiarni Honoratka. Today’s Honoratka is a place to discover traditional Polish cuisine, accompanied by the music of the master. Almost everything here is designed as an homage to Chopin: you will feel his presence, an uplifting experience, enhanced by cultural and artistic events and exhibits. And, of course, there’s even a Chopin menu. Another uplifting experience on the itinerary is the Łazienki Królewskie Park, where, in the heat of July, August and September, every Sunday, from noon to 16:00 there are free Chopin piano concerts performed outdoors at the foot of the Chopin Monument, one of the most recognizable symbols of the city. 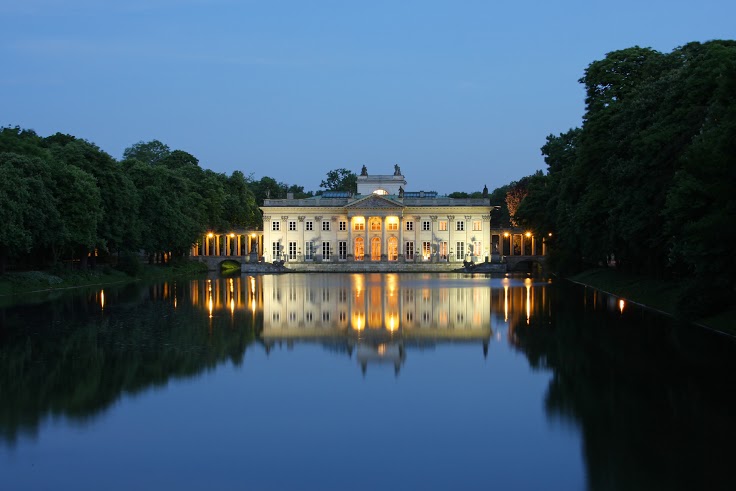 The park used to be a playground for young Fryderyk and the son of the Prince. The gardens surrounding the various royal buildings are among the most beautiful in the city, and are popular for tourists and residents alike, not only for their outstanding landscape, but also for the events held here. Besides Sunday Chopin concerts, from June to September you can also appreciate performances by the Horse Quadrilles, which are staged on each first sunday of the month at 12:00. Łazienki Królewskie Park is the site of the Royal Residence of King Stanisław August, today a prestigious museum, showcasing the Royal collections of paintings, sculptures, numismatics, and graphics, as well as temporary exhibitions on various themes. No other landmark on the Chopin itinerary is as authentic as Salonik Chopinów, a small part of the flat where the composer spent his last years before leaving Poland. The flat, the only one belonging to the composer, which is still open to the general public, can be found inside Pałac Czapskich, formerly Pałac Krasińskich, and currently the Academy of Fine Arts. The apartment, however, doesn’t feature original furnishings, which were destroyed or lost during the World War II. Instead, the beautiful drawing salon was recreated in 1960 based on drawings by Antoni Kolberg. If these landmarks are not enough to tame your thirst for knowledge, step inside Pałac Ostrogskich for the largest collection in the world of memorabilia and documents related to Chopin. One of his original pianos is still preserved here, together with manuscripts of his works, letters, notes, photographs, personal items, and much more. Unlike most museums celebrating the life and work of a local hero, the Fryderyk Chopin Museum is the most modern biographical museum in Europe. The experience is direct, hands-on, designed to satisfy curiosity and interest in visitors of all ages. 15 different rooms inside the palace are each a different “mini-museum” dedicated to the great composer. This tour that celebrates Chopin will bring the purest of the local spirit closer to your heart. This is a kind of experience that completes your understanding of Varsovian tradition in unusual and unexpected ways, in tune, if you will, and perfect harmony: the kind of experience that redefines the purpose of travel, enriching your soul.